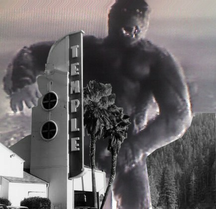 Even among the most avid TC movie fans it is not widely known that the original venue for King Kong was not Manhattan. In this rarely seen storyboard view of Kong's climactic ascent, the Temple Theater and not the Empire State Building was the king's hideout. In a typical Hollywood blunder we see the area to the east of the theater as a thick redwood forest, hardly in keeping with the actual local vegetation.

Sadly, when the first version was previewed, audiences found Kong looking more amorous than menacing in his approach to the building, and the locale of the picture was switched to the east coast, which explains why New York is so much more widely known than TC.
Oct 4, 2014 | Link | 0 Comments
Got News? Contact the Editor