TC News/Blog
☰
History
Temple Name Goes Back to Tenth Century, or does it?

An hour or so on Ancestry.com can be interesting. TC founder Walter P. Temple's paternal New England line crosses from England in the 1630s. That much is probably true; it can be documented in the census from 1790 and from town and church records for the other 150 years of the colonial period, beginning with the immigrant Abraham Temple.

Temple's maternal Workman line blends English and Mexican ancestors and disappears into the mists and myths of New Spain around 1620 with families named Urioste and Vargas. His mother, Antonia Margarita Urioste de Workman, was born at Taos pueblo, but all US census records in which she appears consistently show her as born in Mexico. The ambiguity of her birthplace is resolved when one recognizes that in 1830 Taos was in the Mexican territory of Nuevo Mexico, so if a census worker were to ask "in what country were you born," it would be as correct to say "Mexico" as "United States." Statements by some sources that she was Native American are disproven by her long lines of Mexican ancestors.

Here beginneth the fun: Scores of unrelated people contributing information to A.com also trace unrelated ancestors including those same Temples back to the Norman name "de Temple" back to the Ninth Century. It is not clear what happened just before one Abraham Temple of England boarded his boat for the new world. There is a substantial disagreement among both Temples and historians about just who Abraham T (1600? to 1639?) really was. Was he the son of Brother Number One, Brother Number Two, or "perhaps the postman," among other suggestions.

Follow the links, and one arrives at one Leofric III, Earl of Mercia (central England), 988-1057, with branches to other ancient pre-Norman families. Leofric's wife Godgifu or Godgyfu is more famous than her husband. Her Romanized name is Godiva, yes, that Godiva. She was known in her own time as a philanthropist for her gifts to the church, but of course she's better known in legend.

A bit more probing takes us to Leofric's grandmother, Aethelfraeda, wife of Aethelred "the Unready" and granddaughter of Alfred the Great, king of Wessex and the first king of unified Saxon England. Alfred's grandfather in turn was Ecgbert of Wessex, now best known to TV viewers of "Vikings" as the sometimes enemy and sometimes patron of the quasi-mythical Viking king Ragnar Lothbrok. If true, then Ecgbert would be W.P. Temple's 27th great-grandfather.

For you Ancestry.com users, the entry point is here. You must be an enrolled user to pursue it. If you find I've made an error, science demands that you correct my hasty tunneling. I've been having too much fun hopping on my horse and riding off in all directions to document the steps in this research.

Faith in "A.com" all depends on your level of confidence that the persons claiming any given ancestor are correct. Following the lines backward 27 generations to Ecgbert with a 50% probability (is an ancestor or is not an ancestor weighted equally) gives 1 in 2 27 (under 1/100,000,000) chance of accuracy. When one factors in the fact that the lines are the product of multiple contributors, each with an independent chance of error in each generation, one needs a statistician. Help!

It's probably part mythology, of course, but nevertheless fun. To paraphrase George Gershwin, the things that you're liable to read on the flyleaf of Grandma's Bible, they ain't necessarily so.

I intend to update this article as time allows. If you wish to help, drop a line. RC

The old Temple Theater property (recently Edwards, et al.) is due for redevelopment; the plan is a subject of some local controversy. If you have a comment, jump in! (Click Comments; scroll to bottom of article.)
Feb 23, 2006 | Link | 3 Comments
Albertsons or ...? That is the question.
According to the Star News, the TC Albertsons at the southwest corner of Rosemead and Las Tunas will close in April 2009. No plans have been announced for the location, which has served the community for about 30 years.

UPDATE: 2018 -- And so it was written that the Albertson's and its neighbors did verily into history pass, joining the Temple Theater and other landmarks in the great gazeteer of history. 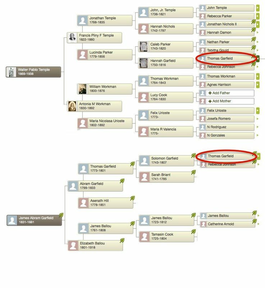 Thus, if Ancestry.com and its members are to be believed, Walter P. Temple was Pres. Garfield’s third cousin. Of course, Garfield is better known to history as a target than a president (see Wikipedia). He died from complications of a gunshot wound in 1881 after serving less than a year.

Had anyone kept track, we might all have attended Garfield High School!

And BTW, the little leaves in the graphic are the same ones advertised on TV, by Ancestry.com so if any of our readers are Ancestry nerds, they might like to check my work and fill in the gaps, or, of course, refute and chastise me. :-)

(This item is revised from an earlier report, adding a better family tree graphic and additional Garfield family information.)